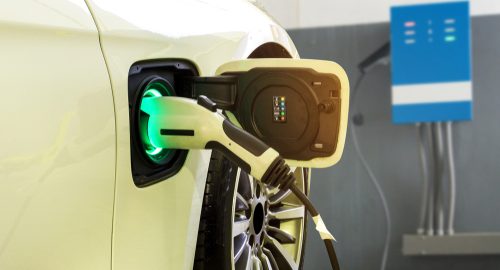 As any homeowner can attest to, a broken or malfunctioning garage door in need of repair can cause some serious safety concerns. A garage door can come crashing down, causing serious injury. This particular story doesn’ t have anything to do with a broken garage door, but it is probably the worst damage done to a garage door we have ever seen. The damage didn’t come from vandals or weather conditions, but another cause, which is a very unusual one.

The lithium batteries that come with EVs can overheat and have the possibility of exploding. While this is rare, it presents a very real danger. In July of this year, an EV owner in Montreal, Canada had his garage door blown completely off and launched across the street after his Hyundai Kona exploded.

There are conflicting reports as to whether the EV was plugged in when it exploded. The Candian Broadcasting Company (CBC) originally said that the car was not plugged in or charging at the time of the explosion. However, a Montreal firefighter did tell the Global News that the car was plugged in. Thankfully, no one was hurt by the explosion, but if anyone was out on the street when it happened, serious injury or death could have occurred.

As is to be expected, Hyundai of Canada was prompted to investigate the explosion, in an effort to prevent such occurrences in the future. The Hyundai Corporation in Canada said that the number one concern is that of their customers. Conflicting reports still exist as to whether the vehicle was plugged in and charging at the time. The common thought is that the lithium-ion battery overheated, which caused the explosion.

Similar explosions happened in China with electric vehicles made by Tesla and Nio in May of this year. There were over 4,000 EVs recalled in China due to explosions that caused fires in China. According to a report from the National Highway Traffic Safety Administration (NHTSA), EVs don’t present any more safety concerns or dangers to owners than their gasoline-powered counterparts.

“The propensity and severity of fires and explosions from the accidental ignition of flammable electrolytic solvents used in [lithium-ion] battery systems are anticipated to be somewhat comparable to or perhaps slightly less than those for gasoline or diesel vehicular fuels,” the NHTSA report concluded.

How to Replace this Garage Door

Now that we know the story behind the garage door explosion, how could the owner fix it? First, if you take a look at the damage to the garage, the brunt of it happen to the roof. A large part of the roof is completely blown off, which will obviously need to be replaced. The home appears to be brick, so the structure surrounding the garage appears to be relatively intact. It’s not possible to tell from the pictures if the garage door tracks are in tact, but they should probably be replaced as well. The repair costs will be high for this Canadian homeowner, but no one was hurt – which is the most important part of this garage door explosion story.